I'm going back to a PGT focus for this month's Pulse report (having looked at current attitudes to PhD study last month). If you head down the post, you'll find some updated stats for overall confidence in Masters-level study, plus a look at how the recruitment pipeline is starting to develop beyond September.

But I also wanted to use this month's data to explore a hypothesis: does a country's coronavirus situation and response directly impact international student attitudes?

Anyone who uses the phrase 'these are strange times' (or some variation thereof) right now should probably be banned from blogging for around a month. But, well, I'm not due to write the next Pulse update for... around a month.

One of the particularly strange things for international recruitment at the moment is that both the attractiveness and the actual feasibility of studying abroad is changing in real time, for more or less every destination a prospective student might consider.

With that in mind, it seems reasonable enough for postgraduate marketers and recruiters to ponder: "if someone was set on studying a Masters in Country X this September and now worries that they won't be able to, will they consider going elsewhere?" To put it more crudely: are prospective international students more 'in play' this year than otherwise?

To explore this I'm going to look at four countries for which we have a decent amount of month-on-month data (The UK, Germany, Canada and the USA) and see if student attitudes actually shift in response to each destination's experience of the pandemic.

The aim isn't to definitively assess each country and it certainly isn't to rank them. I'm just testing the hypothesis that confidence in international study correlates with pandemic responses (and / or perceptions thereof).

Attitudes to international study destinations in 2021 (so far)

The graphic below charts the % of people who say they're 'very confident' about postgraduate taught study over the first five months of 2021, segmented according to the country they're considering.

There clearly is some variation by destination:

Confidence in the UK as a study destination dips in February and March before rising steadily in April and May. This broadly fits the pattern of the second wave and second lockdown at the beginning of 2021; it looks like the impact of this has filtered through to international study confidence.

A substantially different trend here suggests we are seeing some localised effects. Confidence starts strong at the beginning of the year, doesn't really dip in February and March and increases much faster in April and May. Canada's second wave didn't rise to the same level as the UK, which perhaps explains the steady January-March confidence. However, its experience of the Delta variant has been worse during April and May.

One possible explanation for the counter-intuitive upward trend in student confidence during this period is that Canada's strong reputation and attractive post-study-work-visa offering have had a protective effect. Another is that there's a lag between rising cases (and government responses) and their impact on international student confidence, with April changes not fully filtering through to May confidence.

There's a possible lag in the data here too. An early 'third wave' saw cases begin to rise from mid-March before dropping rapidly in May. The trend for prospective student confidence could therefore be said to show an increase in March-April driven by positive trends in February and the first half of March, followed by a drop in May as the impact of March-April filtered through ahead of a falling case rate.

Case levels for the USA didn't fall as far in February and remained relatively high during March-April, with less of an obvious third wave, which may explain the lack of any obvious upward trend. However, the inauguration of a new administration at the end of January almost certainly played a positive role in shaping international student perceptions, perhaps explaining the rise in February.

One important factor is the impact of Indian travel bans which came into force around the end of April. India is the second largest recruitment market for all four of these countries (after China). This may contribute to a fall in May confidence for Germany and the USA, alongside a flattening in the UK (where temporary restrictions are partly balanced by the strong appeal of a new post-study-work-visa). The link to a slight rise in confidence for Canada is less clear.

Note: when discussing countries' coronavirus cases and responses above, I'm using data published by the Financial Times and based on official government statistics.

So, is there a link between coronavirus and international student confidence?

It seems that local factors are at play in shaping these trends in international student attitudes. Otherwise we'd expect to see the same broad trend for all four, or the lack of any obvious trends at all.

However, we can't necessarily pinpoint exactly what's driving trends from month-to-month and, as we've seen for the UK and USA, we shouldn't attribute these to coronavirus alone. What we can say is that prospective students are responding to changes in their target countries and that perceptions of these clearly will matter.

This means that effective international marketing still has a role to play regardless of coronavirus impact in your region. One thing all of the Pulse data shows us is that students do want to study abroad this year: we're consistently seeing around 50% or more of our audience saying that they're 'very confident' about postgraduate study, regardless of which country they're considering. If you can help inform them about the opportunities and support to do so at your institution – be they to do with funding, visa assurances, post-study schemes, etc – then you're doing good work. And you might be able to do it even if a prospective applicant was originally planning to study elsewhere.

Turning to the overall trend (for all 22,000+ students in the current Pulse dataset) we see a slight dip in confidence for May, following the rise in March and April:

This suggests that rising case rates, together with further lockdowns and travel restrictions, are having an impact on prospective students. Pulse helps us to recognise this downward trend and be prepared to inform and reassure prospective enquirers and applicants, but it's important to bear in mind that, overall, more than 50% of people are still 'very confident' about Masters study this year.

The final thing I'd like to comment on (again from the overall dataset) is a shift in study intentions away from September 21: 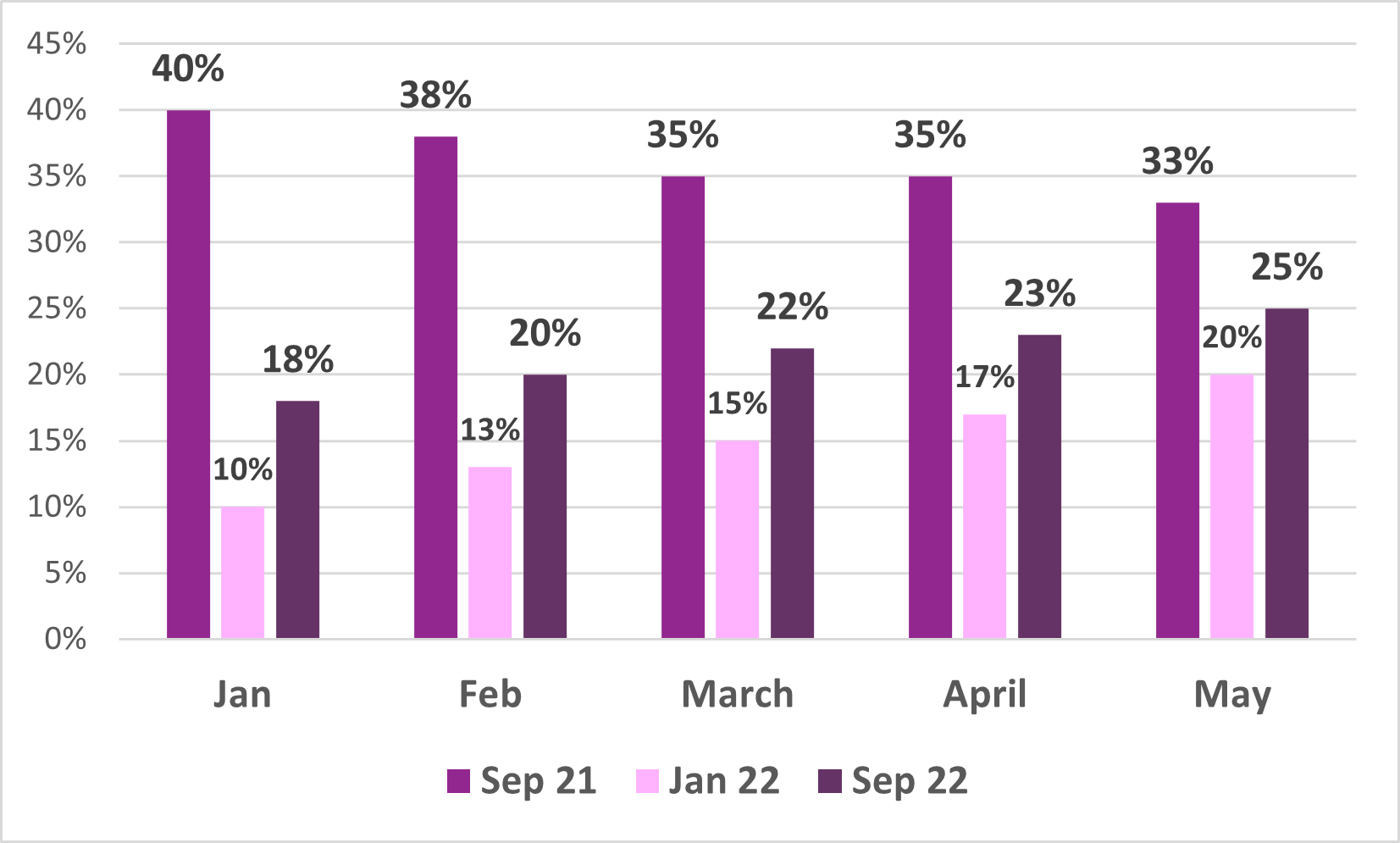 The Pulse data reveals more or less what we'd expect at this point in the cycle, but it's useful to be able to measure and sense-check these assumptions.

Back in January, the proportion of people seeking a September 21 start was around twice as large as that considering September 22. As of May, the gap has shrunk to less than 10 percentage points.

There's still a lot of interest in 'last minute' applications for this year but, based on this data, the balance is likely to tip by July – and Pulse will help us spot it.

What's next for study fairs and open days? The University of Edinburgh's Ewan Fairweather talks through possibilities, plans and predictions.

Taking the Pulse of PhD recruitment in Spring 2021

A first look at the data on prospective PGR students, gathered through Pulse in the first part of 2021.